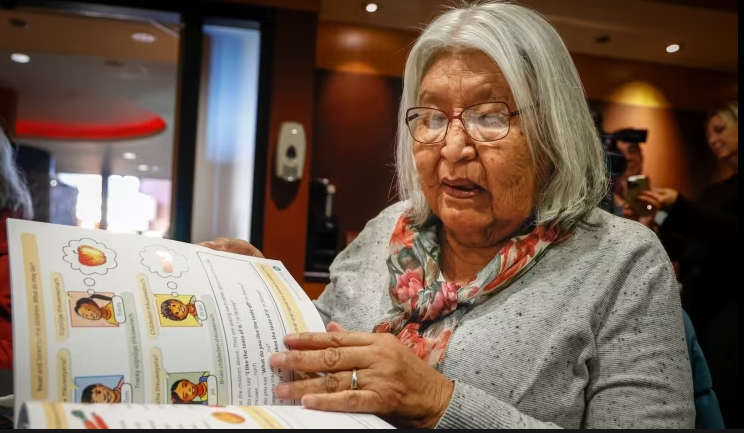 Elder Winnfred Beaver scans through a new textbook of the Stoney language aimed at preserving the Indigenous language at a ceremony in Kananaskis. THE CANADIAN PRESS/Jeff McIntosh

"I'm very proud to be part of this because we're losing our language, maybe this is a new way to bring our language back by writing it down. We are working on it, and I hope the children of the next generation would use it because it's for them," said Virgle Stephens

KANANASKIS, Alta. — The Stoney Nakoda First Nation in southwestern Alberta is using the written word as a way to preserve its traditional oral language.

"This is needed because we are at a crucial time for language revitalization, especially for Indigenous languages here in Canada," Cherith Mark, the language and culture co-ordinator for Stoney Education Authority, said Monday.

Stoney remains the first language for a majority of members on the three reserves that make up the First Nation 70 kilometres west of Calgary.

The language has traditionally been passed along orally and there is a concern that it could fade once some of the senior members are gone.

Stoney is being taught to the 1,500 students on the First Nation, starting off a few years ago with a basic textbook.

An advanced textbook and dictionary were introduced Monday to be used for teaching the language in school, along with a podcast where elders tell stories.

Mark said the students are eager to learn and having it written down will ensure the language remains for future generations.

"It's mostly been oral or verbal because a lot of our speakers have learned the language at home and this is how the language has always been passed down," she said.

"Nowadays, we have young parents not speaking the language at home to their child because some don't know the language."

Virgle Stephens, 66, was one of a number of elders from the First Nation who helped develop the new books. Like with many of the elders involved, the Stoney language was spoken at home when he was growing up.

"I'm very proud to be part of this because we're losing our language," he said.

Stephens wants his knowledge passed along before he and the other Stoney speakers are gone.

"Maybe this is a new way to bring our language back by writing it down. We are working on it and I hope the children of the next generation would use it because it's for them."

More advanced Stoney textbooks will be introduced in the future.

The Language Conservancy, a non-profit dedicated to preserving Indigenous languages, has been putting the material together.

"Many of the Indigenous languages were not written," said Wilhelm Meya, the CEO of the Language Conservancy.

"Most of them learned orally, but writing is so important for learning, especially for a young, modern student who has access to all the other kinds of materials and resources for other languages."

Bill Shade, the superintendent for Stoney Education Authority, said it's important to teach the language before it's too late.

"There's a real urgency for First Nations people to keep their language and anything we can do to support that," he said.

"We've heard from the elders and they want their language to be kept alive, to be taught to all the children in the schools."

This report by The Canadian Press