November 8th is Indigenous Veterans Day. It is a time to remember and commemorate the stories and contributions of Indigenous veterans in the First and Second World Wars, as well as the Korean War.

During the First World War (1914-1918) First Nations, Inuit and Métis participation was proportionally higher than that of any other people in Canada, with one in three Indigenous males enlisting. Many Indigenous women served as nurses tending the wounded as well.

More than 500 Indigenous soldiers died in World Wars I and II. More than 12,000 First Nations (Status and Non-Status), along with a large number of Inuit and Métis, left their homes and families to serve Canada in those two conflicts.

Following World War II, some Indigenous veterans returned from war and had lost their ‘status’, as they had been absent from their reserves for more than four years. This was a provision of the Indian Act at the time. Indigenous veterans were enfranchised, their sacrifices largely forgotten while their rights and status as Indigenous Peoples were taken away.

Today, more than 2,700 Indigenous members continue to serve in Canada's military forces. We are grateful for their sacrifices and contributions to Canada's history and to Canada's security.

Take some time to learn about veterans like Henry Norwest, Tommy Prince and Debbie Eisan—the history of Indigenous Veterans in Canada is filled with stories of heroism and leadership.

On Indigenous Veterans' Day, Remembrance Day, and every day, we honour the service, the courage and the sacrifice of all veterans—at home, around the world and across generations. 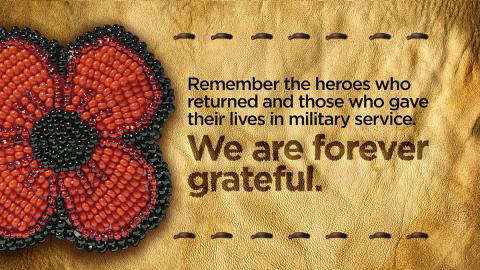